We got enough feedback for the Alpha version and did few demo last month, so in general we know what should be fixed and improved till the public release. It lead to some changes in scope, so release most likely will happen in December. Overall, functionally product is almost ready, but it need to be polished and stabilized in the next month.

We feel that release is close enough and convergence is near!

Now we have to finalize animation and implement drag and drop. It works better than previous menu, but still not perfect when there are 10+ apps installed. Well, it is good enough for private beta, so we will stop here:

Old web site became misleading, so we created a new one with simple look and flexible message:

Initially we wanted to use Slack for community, but it was not very good idea. People should have free access to information and Slack is a barrier. We end up with Discourse.org. It works fine for users, but administration area is a nightmare… Join Fibery Community to get latest updates and discuss the product.

It is always interesting to compare plans and real accomplishments! As usual, only 1/2 of all planned items were completed.

October was a productive month for our designer. In Private Beta we are going to update Apps catalogue and list of apps. This is not an App Store yet, since external developers can’t create own Apps.

Here is the list of Apps that will be added to Private Beta release:

It will be possible to create custom Apps in Fibery. An App consists of custom entities, fields, metrics and views.

People may exchange Apps peer-2-peer. It is possible to create a custom App, export it into a file and send the file to someone else. This someone else can import an App on his Fibery account. We can’t imagine all cases, but it will help us to create Apps (think level design in game development). Other side effects are:

We decided to replace right narrow panel with wide popover. In real cases it inconvenient to work with data in right panel: 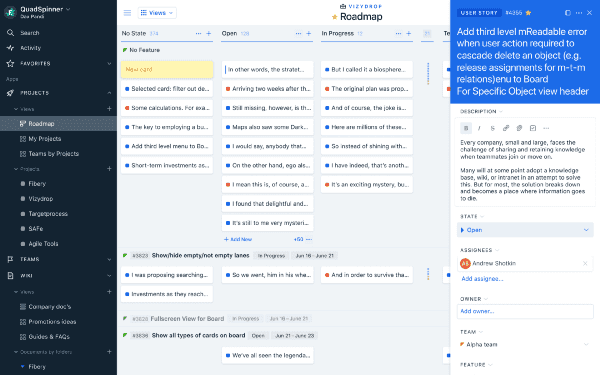 Fibery as a low-code development platform?

I took a look at some low-code platforms on a market: QuickBase, Kintone, Odoo and few others. To be honest, all of them look like outdated ghosts from previous decade. UI decisions are bad and coherence is low. And they are very expensive!

Next year Fibery will provide similar functional for a fraction of price with much better user experience and much faster Apps creation. It will be interesting to touch this market and see how Fibery will behave on it.

In October I read about GIST planning. Itamar Gilad invented great framework for product development and we are going to support it in Fibery. I created basic GIST Planning App in 2 hours and recorded the video to demonstrate the idea:

November plans (with hope to complete 2/3)

The State of Agile Software in 2018